Carefully think where you place the main subject within the image frame, only choosing the central point after much consideration

One of the main trouble with the photographic camera is that it records too much detail, so it is up to you to stress to the viewer the main element or elements relative to the rest of the picture.


The golden mean or sometimes called the golden ratio is a viewer-researched classical guide to placing the main element in such a position that helps restore balance and has been favored in composition over centuries called. The concept is that the most pleasing position for points of interest is at one of the intersection lines dividing vertical and horizontal zones in an 8:5 ratio.

One simple interpretation of this idea is often called the rule of thirds which must be the most commonly followed rule of photography - and the most often broken one.

Here is what you need to do to apply the rule of thirds concept: in your mind, draw two horizontal and two vertical lines through your viewfinder so that you have divided each horizontal and vertical plane of the scene into thirds, that is in a ratio of 1:2 .

In other words, your image should be broken into nine equal zones with four interior corners where the lines intersect as shown in the image below.

It is these corners marked with the red dots that make the strongest spots in your image. If you place the point of interest in any of these intersections, you will typically end up with an interesting composition.

The option of which intersection you select to place your focal point depends upon the subject and how you would like it to be presented in the photograph.

Here the center position of the lighthouse results in a static feeling.

While moving the lighthouse to the top left creates a more effective photograph.

Here is an example where you have excellent subject control. You can have the girl pose anywhere along the road. The rule of thirds indicates this placement which also gives the girl a definite path to follow within the picture frame.

You should always consider the path of moving subjects and, generally, leave space in front of them into which they can move.

If you do not, here is what can happen! The little girl looks like she is going to run right out of the picture.

By placing the subject in the lower-left position, we have used the rule of thirds and given the little girl plenty of room to run within the picture.

Here is another action shot where it's important to leave more space in front of moving subjects than behind them.

You can also apply the rule of thirds guidelines when shooting a scene with a horizon by trying to line up the horizon line with one of the grid lines. Here we have moved the horizon to the upper third and the child to the right.

Or you can choose to move the horizon line to the lower third as in the image below.

In general, place the horizon high or low in your scenics, but rarely in the middle.

The golden ratio is an interesting rule in photography but it should not be slavishly adopted. Always remember that the lines and tones elsewhere in the image all contribute to its unified balance and structure.

Images with their main subject placed very off-center against plain background or surroundings tend to look unstable but on the other hand appear spacious and have an open-air feel. Placing your main subject off-center can work well where another secondary element (typically on the opposite side of the frame) is placed and gives your picture balance.

But there are many photographs that don't follow the rule of thirds, but their composition is still aesthetically pleasing. They most probably are following other variations of the golden ratio and one such case is the Golden Triangles.

It is more convenient for photos with diagonal lines. There are three triangles with corresponding shapes. Just roughly place three subjects with approximate equal sizes in these triangles and this rule would be kept. The following images all have a nice composition, but they do not appear to follow the rule of thirds. The golden triangle is a much better way to conceptualize them. 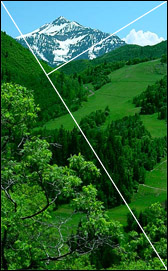 The final compositional tool based on the Golden Ratio is the Golden Spiral. There should be something, leading the eye to the center of the composition. It could be a line or several subjects. This "something" could just be there without leading the eyes, but it would make its job.

This is probably the most pleasing of all of these rules, if used expertly. It is the reason that spiral staircase photos and photos of snail shells are so appealing. But it is not limited to those contexts.