They come in a variety of formats, do not require batteries and do not loose images when the power is turned off

They are only used to temporary store the images. At some point you transfer the images from them to a computer, erase the image data stored on the device, and reuse it.

Older and low-end cameras have built-in fixed storage that can't be removed or increased so when it gets full, you are done shooting until you download the stored images. This greatly reduces the number of photos you can take before having to erase them to make room for new ones.

The memory cards are inserted into the camera via an access flap so that full cards can be replaced with empty ones easily and quickly.

Knowing how many images you can store in your camera is important as once you reach the limit you either have to stop shooting (think of it as finishing a film roll) or erase some existing images to free up space for new ones. The number of images will depend on a number of factors including:

Memory storage devices come in a variety of formats; they do not require batteries and do not loose images when the power is turned off.

In general different camera manufacturers like to use their own or at least different type of memory storage media format. This makes removable media formats usually not exactly interchangeable. Once you have a sizable investment in memory cards, you are locked into using only those cameras that support your format or buy a new set of cards. Make sure you check your particular camera model/manufacturer to see what you need.


Here are the details on the major memory card types:

CompactFlash Card: This is a very common memory card. Flash memory card consumes little power and takes up little space since it is about the size of a matchbox. This makes them very convenient; you can carry a number of them and change them as needed. They were developed by SanDisk Corp.

There are two types of CompactFlash cards: 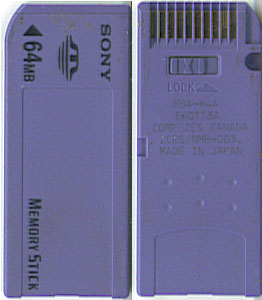 Memory Stick (MS): This is a proprietary format from Sony developed in October 1998 and they are used only in Sony products. These thin and flat removable memory cards are about the length of your thumb and shaped something like a stick of gum. Compared with current Secure Digital and CompactFlash cards, the original MS card is incredibly slow.

In addition to the original Memory Stick, Sony came out with a Memory Stick PRO in 2003 which allows greater maximum storage capacity and faster file transfer speeds.

To address the size limitation and slower transfer speed of the Memory Stick DUO, Sony released in March 2008 a Memory Stick PRO Duo version with capacity of 16 GB. There are to release a 32 GB version in 2009.

Standard Secure Digital card capacities range from 4 MB to 4 GB, and for high capacity SDHC cards from 4 GB to 32 GB as of 2008. Note that since the high capacity SDHC card is a relatively new format, this type of card might have compatibility issues with some older camera models that cannot read this format.

MultiMediaCard (MMC): SD and MMCs are nearly identical on the outside, but MMC cards are slower, less secure and are physically thinner than SD cards. They are about the size of a postage stamp and are used in a few pocket cameras. A MultiMediaCard can fit into an SD slot, but an SD card cannot fit into an MMC slot. MMCs are usually compatible with cameras that can use an SD Card.

xD-Picture Card: Olympus and Fuji jointly developed the xD-Picture Card, which has an ultracompact design and storage capacity of up to 8GB. These cards are compatible with different digital camera brands and are generally fast in comparison to the Memory Stick (MS) format. 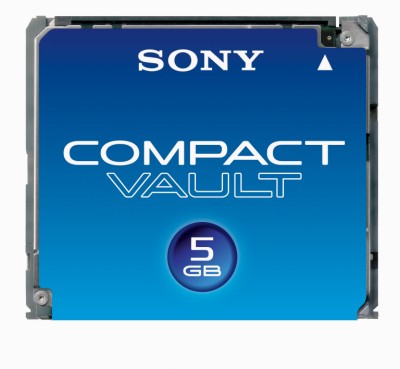 The microdrive storage device was pioneered by IBM and typically offers larger storage capacities at a cheaper cost per megabyte. They use more battery power though, create more heat and have a higher risk of failure because they contain moving parts.

Microdrives like Hitachi's Microdrive and Sony's Compactvault are high speed, high capacity hard disk drives but are so small they can be plugged into a Type II CompactFlash slot on a digital camera or flash card reader. (Type I CompactFlash slots are thinner).


Here are some additional considerations to take into account with regard to memory storage devices and how your camera stores images: