The appearance of subjects and the mood of a scene is transformed under different lighting conditions either caused by change in weather or time of day. Learn to use them to your advantage.

We often take light for granted. It not only allows us to see the world around us but it can also be responsible for evoking an emotional response when looking at a scene. The effect of lighting can sometimes be as important as the subject itself in the decision to take a photograph.


You, as a photographer, do not have control over the existing light conditions but should learn to recognise the right time and best camera position to capture the mood you want to convey in an image.

When we talk about quality of the light , we define it in terms of "hard" and "soft" light.

An example of a natural hard light is that coming directly from the sky on a clear day. In such lighting conditions objects casts well-defined, hard-edged shadows and these in turn create strong lines and patters to an image, as well as dark dramatic contrast. 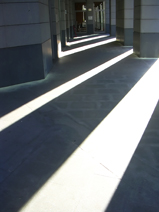 The direction of the light is also important. If it is coming from one side, especially at 90 degrees to the subject, it gives a strong three-dimensional effect and highlights the texture of the subject.

Look as an example at the image below, the side lighting creates strong shapes with great contrast, where the lit parts are well-defined. The shadow area of one column is contrasted against the highlighted area of the next, creating a pattern of shades. 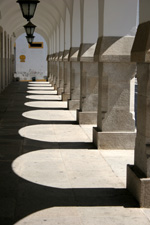 Take care when photographing high-contrasty images.
You need to expose correctly as otherwise you might end up with the lightest detail appearing burn out or wanted shadow appearing too dark.


On the other hand, when we have an overcast day we are working with the softest quality light. In such lighting conditions, shadows are ill-defined or often non-existent and the lines and shapes in your image are created by the forms of the subjects themselves.

Scenes with predominantly varied colours and shapes are best shot in soft lighting to reveal maximum overall information without the complications of shadow.

You can still find soft lighting in a clear sunlit day, by positioning your subject totally in a shadow.

Note that the resulting image might have a slight blue cast but this can be easily corrected with an image editing software or when printing.


Time of Day and Colour of Light


As the sun moves its position around the sky, the colour of its light changes at dawn and dusk and this combined with the changing effects of weather can offer some incredible lighting opportunities.

When photographing a fixed subject such as a landscape, you can pre-plan to be at the right place at a time where the lighting conditions will bring out the features and create the mood you want to show.

Photographing at dusk can be particularly rewarding as the scene’s appearance is changing by the minute.

Mounting a camera with automatic exposure
to adjust settings as daylight dims is ideal to capture landscapes at dusk.


City night scenes are often taken just at dusk when the landscape is lit by both the city lights and the remaining daylight. It can make for some exceptional images.

The change in colour of light observed at different times of day can also have a big difference to the emotional effect of your image. Contrast the cold blue ice scenes below

with the atmosphere created by the orangey light of the sunset :

Always pays attention to the subject colour when atmosphere and mood are your main priorities.

When there are multiple sources of light in a scene - daylight, fluorescent light, street lighting etc. - the image will not photograph all the same colour.

To deal this issue, the majority of digital cameras are equipped with a white balance setting that can be either automatically or manually controlled to adjust the capture to suit the light source.

You will find it a challenge to shoot a portrait lit by multiple light sources as the results might look odd and the mixed lighting on the subject might be difficult in the post-processing stage.

You can also encounter problems when colour-sensitive subjects such as people, food and flowers are in surroundings with strong tinted daylight. A person can be washed over with a wrong colour coming from a nearby strongly coloured wall for example. Or your subject can get a green tint from the greenery of sunlight grass or foliage. Note that if you include the source that is causing the tint , it because much more acceptable in the image.