( born 1925 )
" The best pictures are uninvited, they're suddenly there
in front of you ... easy to see but difficult to catch.


Jane Bown has over 50 years of practical experience as a professional photographer for the Observer newspaper.

During the years she has became many people's favourite photographer, photographing many of the most famous individuals of the second half of the twentieth century.

Jane Bown is also among the least affected photographers; her methods of working are straightforward and practical, using simple equipment and no tricks. For most of her career she has worked exclusively in black-and-white, using only natural light thus setting as few barriers as possible between her and the subject.

Jane Bown was born in Dorset in 1925 and she spent the war in Liverpool with the Wrens working as a chart corrector. After leaving the service she had been offered a two-year grant to study a course of her choice and looking at her options she decided to learn photography at the Guilford School of Photography.

When she graduated she embarked on a career as a child portrait photographer and until the winter of 1949, Jane's photographs were mainly of children. Her lucky break was meeting Mechtild Nawaisky, picture editor of picture post, Lillyput and later of the Observer who came across a portfolio of Jane's photographs and immediately liked her work.

Mechtild Nawaisky telegrammed Jane, commissioning her to take portraits of the philosopher Bertrand Russell and his bride as they breakfasted in a London hotel and so Jane found herself working for the Observer.

The 1950s were days of fourteen-page newspaper, kept thin by a rationing of newsprint that was not lifted until 1957. Despite this, Mechtild Nawaisky and David Astor, editor of the Observer from 1948 to 1975, felt that strong photographers could justify their space in the paper, even if they were unrelated to news. The argument was that they could illustrate more enduring truths: the coming of spring, the beauty of landscapes or that the poor and the rich are always with us.

David Astor, believed that the paper's reputation of bohemianism might have been largely unearned, so was a label that soon came to be attached to Jane Bown, that of a "brilliant amateur".

It is true that you could see her taking out cameras and lenses out of a wickers basket. True also that the nearest she got to carrying lights is a 150-watts bulb which in a extreme situation she might pop into a table light. But Jane amateurism is a front for a kind of professionalism most of us meet only once in our career.

For the first fifteen years with the Observer Jane Bown used a Rolleiflex camera with a Tessa F/2.5 lens. She was attracted by the 2 ¼ inch square format into which the profile portrait fitted easily and loved the quality of the Rolleiflex pictures, which gave beautiful and absolutely pinpoint-sharp images. The Rolleiflex allowed her to take twelve shots per film and in the early days she used to go along to assignments and take six, seven or eight photographs at most.

In 1964 she changed to the SLR (single lens reflex) camera  and was instantly at ease because it allowed her to work quickly and unobtrusively. At assignments she will take her Olympus OM1 camera, find a good spot, preferably close to a good source of natural daylight, fiddle with the exposure and then take a single roll of film, occasionally two, from which she would almost invariably select either the first photograph or the last.

By this time the paper was noticing another quality in Jane Bown, that she was not only a good photographer who could capture things amusingly and strikingly, but that she could photograph people and come back and tell what they were really like.

Do you find Jane Bown's approach inspirational ? Has it influenced your
photography in any way ? Have you shot in a similar style?
Click here to share your thoughts and images with us as well as to see other visitors contributions...

This gift may not be a mysterious as it seems, for a while Jane believed that faces reveal characters; she is also an acute listener and extremely perceptive person. The secret as she says is to get the sitter to relax, to show themselves as they want to be. The character of the portrait lies in the lines of the face and its expression.

During Jane's career she has never worked with one reporter, but it was when she was working with Michael Davie that she took her two most famous pictures, those of John Betjeman and Samuel Beckett.

"Some people take pictures, I find them. These pictures are the real me."


In her own words, some photographers "make" pictures but she tries and "finds" them. Jane Bown waits and looks, manoeuvring herself around the subject, framing the image in the lens and then suddenly she will see the picture.

She often says that her photographs are instinctive – she doesn't always know how to get it right, but she does know when it feels right. Every now and then she gets a "jackpot" picture just like the photographs of John Betjeman and Samuel Beckett. The Betjeman shots of 1972, show him roaring with laughter on the edge of a cliff, Jane always said, it was one of those sudden miracles that just happen. 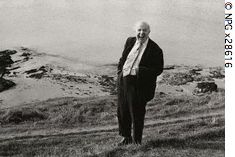 The Beckett portrait was another of her "jackpots" shots. It was 1976 and she was sent to the Royal Court Theatre in Sloan Square were Billie Whitelaw was appearing in "Happy Days". Unexpectedly Jane caught up with Beckett at the stage door after a rehearsals, she told him that he was promised a photo session and took three pictures, printing the middle one, and this is the result.

Reporters who have accompanied her on jobs usually find themselves tied on knots trying to explain her technique. Michael Davie who like most of the reporters preferred not to do an interview in front of a photographer says he never minded Jane because she had the ability to cease to exist.

An important aspect of Jane Bown's technique is that she does not use lights, flash or light meters. This means that she travels light and doesn't waste time setting up. This allows her to slip in with very little fuss, so her objects are generally relaxed and become comfortable with her in a short space of time.

When she has to photograph celebrities she often works in the suites of hotels and she knows most of them like the back of her hand. As soon as she gets to a location she tries to find a good spot near a natural source of light. She knows where the light will be at any time of the day, and will gently manoeuvre her subject into it. If the light in a room is completely hopeless, Jane will usually try to find an alternative source of natural light on a staircase for example.

Once light is dealt with, she can get on with the business of taking the picture. In her photographs Jane Bown simply looks at people and tries to capture their essence. She tries not to impose herself or her ideas, as this will definitely affect the mood of the final image. She prefers to stay invisible, looking and observing, working around what is there, rather than creating a situation.

From her pictures you can sense that she loves people, because they do not have to perform they can just relax and be themselves. Often the object will make a gesture, a movement or an expression that will "make" the picture thus Jane always considered portraits photographs a joint creation between her and the sitter.

During her 50 years of professional career Jane Bown has never been out of fashion with the reader of the Observer newspaper. And in her unspoken mission of being a truthful photographer for the Observer, down to its very name, she has been her perfect accomplice.

Click below to see contributions from other visitors on Inspiration: Jane Bown ...

Picking Up Jane Brown Not rated yet
Jane Brown? Never knew the woman, never met her, wish I had. Became vaguely aware of her photography a few years back, saw an image of the goggle-eyed …