It is with the use of an image sensor that a digital camera
captures an image.

The key difference between traditional film cameras and digital cameras is in the way they capture the image. Instead of film, digital cameras use an electronic sensor, or more accurately, a grid of small electronic sensors. Each of the individual sensors provides a small portion of the full description of the scene that makes up the digital file. After photographing the file is stored on a memory card held within the camera.

However, there is now a well-established alternative, the Complementary Metal Oxide Semiconductor (CMOS) image sensor. On the surface of these fingernail-sized silicon chips are millions of photosensitive diodes, each of which captures a single pixel in the photograph to be.


Both image sensor types can give very good results and are used by major camera companies  but they differ from one another in the way they process the image and the way they are manufactured. The role of the image sensor irrespective of the type is to sense the light that comes in and convert the light energy to an electric signal that is amplified and then digitized and finally processed.

The Charge-Coupled Device (CCD) image sensor gets its name from the way the charges on its pixels are read after an exposure. The charges on the first row are transferred to a place on the sensor called the read out register. From there, the signals are fed to an amplifier and then on to an analog-to-digital converter. Once the row has been read, its charges on the readout register row are deleted, the next row enters, and all of the rows above march down one row. Each row is "coupled" to the row above so when it moves down, the one above moves down to fill its old space. In this way, each row of pixels can be read—one row at a time. 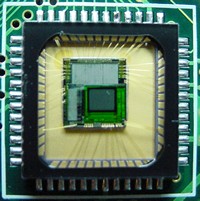 
Differences between the two mian image sensor types lead to a number of pros and cons:

They also differ in the way they are manufactured. The CCD sensors are created in factories using specialized and expensive processes that can only be used to make other CCDs.

Meanwhile, larger factories use a different process called Complementary Metal Oxide Semiconductor (CMOS) to make millions of chips for computer processors and memory. CMOS is by far the most common and highest yielding chip-making process in the world.

Despite their differences, they both play the same role in the camera - they turn light into electricity. For the purpose of understanding how a digital camera works, you can think of them as nearly identical devices.

What is Exposure and
How to Use it

Use of Shutter and
Shutter Speed