One of the challenges of a photograph is to convey the essence of a scene within the hard edges of the image frame and the height-to-width proportions have a strong effect on the picture.

Whether to choose vertical or horizontal composition is often dictated by the proportions of the subject in your image or how you are planning to use the image (for example, horizontal format for viewing on a computer screen or vertical to suit magazine cover). But often than nor, the choice of image format is up to you.

Horizontal images tend to be easier to scan from left to right. They emphasize the flow of horizontal lines and structural lines. In a landscape as the image below, using the horizontal frame allows to increase the importance of the skyline and gives a sense of panorama and stability.

Vertical frame of the other hand, tends to give the main subject more imposing, dominant effect and emphasizes the scene's depth and distance, as the scale between foreground and furthest detail is greater. When you scan the below picture vertically, you tend to make comparisons between the elements in the top and bottom of the frame rather than left to right. 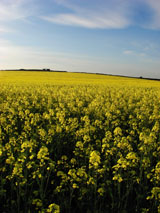 You can also have square images but they project least influence. They give a sense of a balanced and symmetrical effect since each corner of the image tends to pull away from the center.

Try framing the same scene in a variety of ways producing pictures that emphasize different parts of the scene. Try turning your camera from the horizontal to the vertical
to produce different point of view.

You can use the way you frame your image as a powerful way to include and exclude certain elements in the scene. For example, you can decide in a landscape whether the horizon should appear high or low, or how much of an element you want to leave in or crop out.

Remember that it is possible to crop any picture to different proportions with a photo editing software but nothing you leave outside the viewfinder can be added later !