(1853-1943)
"Photography is Photography; And in its purity and innocence is far too uniquely, valuable and beautiful to be spoilt by making it imitate something else." 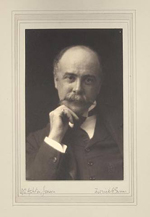 Frederick Evans took up photography around 1880. Evans advocated "untouched realism" in an era when it was believed that only by elaborate manipulation of photographic negative and print could photography approximate fine art.

Frederick Evans belonged to a group of photographers who described themselves as "Purist". He developed his negatives mechanically, and printed them, without retouching, by contact on platinum paper, which he chose for its ability to reproduce the rich tonal scale of the negative.

Frederick Evan's greatest artistic achievement is his photographs of cathedrals. His intention was to make viewers feel as if they were actually inside the cathedrals when they looked at his photographs.

Has Frederick Evans' approach influenced your photography in any way ?
Have you shot in a similar style?
Click here to share your thoughts and images with us as well as to see other visitors contributions...

To achieve this he sometimes spent as much as two weeks living in a cathedral studying the way light and shadow defined forms and created a spiritual atmosphere. He was tireless and fastidious in his work. Before he would photograph, care was taken to remove unsightly chairs and Victorian gas fixtures that clashed with the purity of the medieval carvings.

Searching for relationships between light and dark, Evans strove to express the "Divine Plan" amid all the stone. Never content with fragments of architectural and symbolic elements, he sought to capture the soul of the cathedral, believing that "the structural qualities of a Gothic cathedral are very closely allied to those organic principles which underlie the growth or cohesion of living things."

He took great care in selecting both the point of view and also the time of day and weather conditions to get the lighting effects that he wanted in his work.

Frederick Evans used a view camera, giving him full control over perspective and focal plane, typically with half frame negatives (4"x5"). These he hand printed using platinum. This gave archival permanence, great detail, and a much wider and finely graded tonal range to his images. The below photograph is typical of his style. Beautifully sharp and detailed, absolutely correct perspective, and gloriously lit. 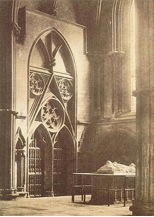 Frederick Evans' masterwork is of Gloucester Cathedral photographs, printed in 1890 and 1891. In the photograph "Gloucester Cathedral. Cloisters, Interior of Lavatorium", Evans photographed the diminishing perspective of a narrow stone hallway illuminated by sunlight streaming through stained glass windows: 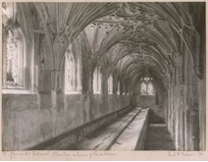 The viewer's eye is drawn to the end of the hallway where two panes of stained glass are partially dissolved by light. Overhead, carved stone columns rise into an ornate and protective archway.

Biographer Anne Hammond's description of Frederick Evans' photographs applies to this image: "From a richly decorated wall of niches and canopies representing the world of the senses, the arched doorway of spiritual transition opens on a seemingly endless recession of aisles lit from within. Throughout the length of the cathedral the viewer is led on a visual pilgrimage toward interior illumination." 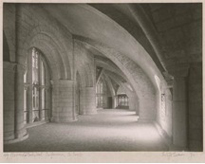 
On the right side of the photograph stone walls and buttresses curve like waves until they come to rest on the perpendicular wall on the left. Light floods in through windows on the right, illuminating the ledges of walls, while casting others in shadow. The play of dark and light of the architectural forms implies the ending of one spiritual state and the beginning of another.

This extraordinary photograph recalls the words of art critic, John Ruskin: "the power of architecture may be said to depend on the quality of its shadow".

Here are some other photographs from Frederick Evans' Gloucester Cathedral collection: 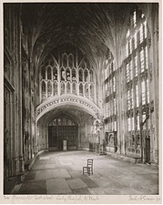 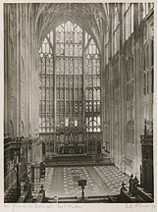 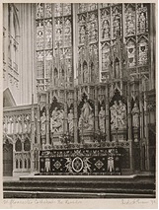 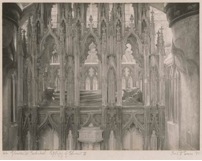 Return to Homepage from Frederick Evans