Diane Arbus (14 March 1923 - 26 July 1971), one of the most notable figures in contemporary documentary photography, produced a substantial body of work before she committed suicide in 1971. 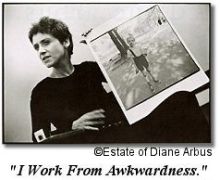 The unconventional subject matter of her portraits, people living unusual lives on the edge of social acceptance, as well as those photographs depicting supposedly "normal" people, were controversial at the time of their creation and remain so today. Her uniquely personal style is much imitated but as a "classic" her art is much debated.


Do you find D. Arbus' approach inspirational ? Has it influenced your
photography in any way ? Have you shot in a similar style?
Click here to share your thoughts and images with us as well as to see other visitors contributions...

Diane Arbus discovered most of her subjects in her hometown of New York City. She was primarily a photographer of people she found on the city streets in the 1950s and 1960s. The photographs from this period, explore the relationship between appearance and identity, illusion and belief.

Most significantly, Arbus' photographs show the encounter between photographs and subjects as a self-conscious meeting, an encounter that becomes the central drama of the picture.

One of Diane Arbus' most recognisable images is that of "Identical Twins", Roselle, NJ, 1967 - a portrait of twin sisters who are identical but yet not the same.

The girls are wearing identical dark corduroy dresses with white collars and cuffs, white tights and thick white headbands in their hair. They are standing side by side, their eyes looking straight into the camera and as one looks from one face to the other one realises that their features are by no means identical, behind their sameness (and the conformity of middle-class society) lie discomfort and turmoil.

The more one studies the girl's faces, the more like an allegory, they seem to represent the human doubleness, of the two selves we believe to possess: the inner self of genuinely felt negativity, doubt and aggression and the outer self of assumed kindness and niceness.

Diane Arbus' biographer Patricia Bosworth says the photo encapsulates the photographer's vision. She was involved in the question of identity. Who am I and who are you? The twin image expresses the crux of that vision: in freakishness and the freakishness in normality.

Diane Arbus' biographer Patricia Bosworth says the photo encapsulates the photographer's vision. She was involved in the question of identity. Who am I and who are you? The twin image expresses the crux of that vision: in freakishness and the freakishness in normality.

Arbus's photographs are almost invariably confrontational: the subjects look directly at the camera and are sharply portrayed, lit by direct flash or other frontal lighting. It seems she was less interested in composition of visual inventiveness then in revealing the psychological truths of those she photographed.

"I don't like to arrange things. If I stand in front of something, instead of arranging it, I arrange myself. "


The use of the flash in daylight on the streets was crucial to her photographs. She wanted to avoid the situation where faces became dark because the background behind them was lighter. By using the flash Arbus did not have to manipulate people who were backlit by turning them towards the sun light but instead could get them unblinking in the position they were.

The employment of flash in daylight also gave an unnatural feeling to the pictures. It gave the subject in her photographs a certain fun-house presence, picking up the shine on faces in a way that made them physically grotesque.

Diane Arbus' insights into the nature of everyday life where the familiar is believed to be marvellous and psychologically powerful are the work of a strong original vision. Her emphasis on the unique characteristics of each individual, or what she termed "the flaw", reflects a deep and abiding humanism.